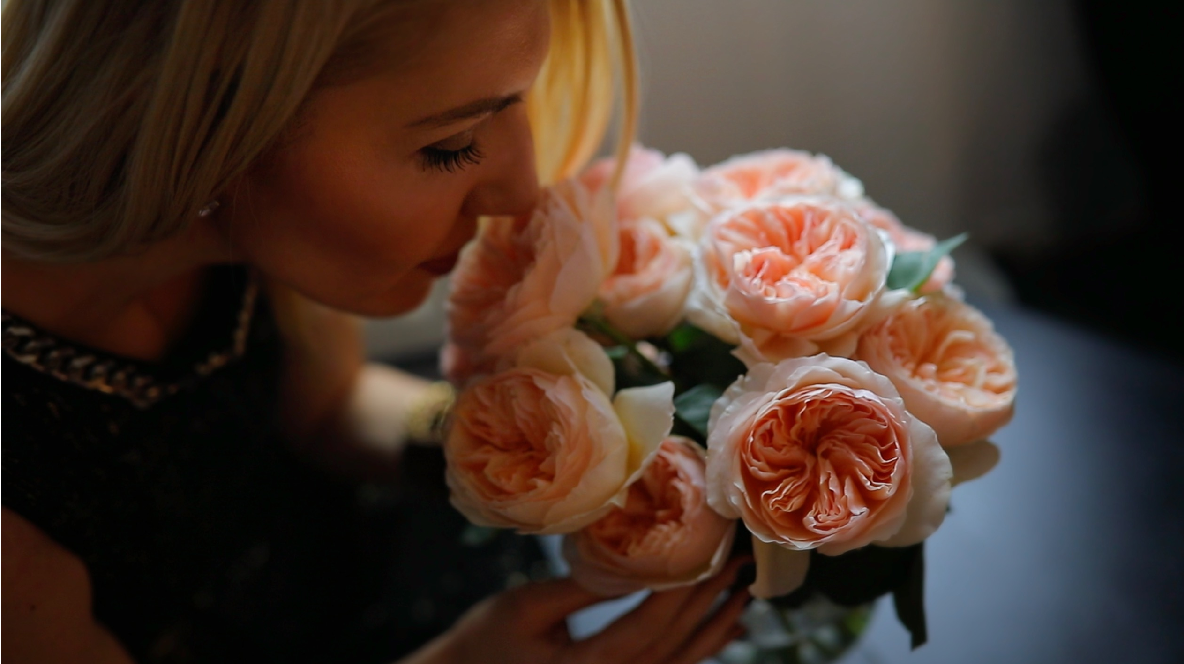 Alina Neacsa is a Flower Designer for Premium Events, a Floral Design Trainer, a writer for the My Dream Garden magazine (monthly edited in +15,000 copies) and constant subject for articles in national and international media.

We believe Alina Neacsa is a top floral designer in Romania, and her students benefit tremendously from her experience. We know she is a fan of David Austin Wedding Roses in particular! We think it is a good idea to give Alina the spotlight and to tell you more about this amazing floral woman.

But first, the beginning, who is Alina Neacsa?

Alina Neacsa graduated from the Faculty of International Economic Relations (REI) of the Bucharest Academy of Economic Studies. First, she was working in a front-office bank, as a Bank Teller. She did like the job at the bank, she was in a place she had been preparing for her whole life, but she felt like a small wheel in a great mechanism. Alina wanted to start a business on her own, with passion for flowers. So without much hesitation, Alina decided to resign from the bank and to start a business in event planning. In just two years, Alina had her own event hall in Bucharest. As the General Manager, she managed five salons with around 200 weddings, baptisms, and corporate events each year.

From organizing events to floriculture and floral arrangements

In the package of services provided to her clients to whom Alina organizes events, weddings, baptisms or corporate parties, floral arrangements were also included. These were created by different suppliers in Romania, available on the market at that time, in the years 2010-2012. Alina; “With all my efforts to find partners to deliver bouquets and premium floral arrangements, as I organized events, it was impossible to find suppliers to the level I expected. After successive attempts to increase the quality of arrangements received from suppliers, I gave up the expectation from others and I decided to start creating bouquets and floral arrangements. Flowers were my great passion anyway, so things went well from the beginning. Already my first works were at the level of those received from the suppliers, so I decided to go ahead in this area.”

At that time, there were no floral courses in Romania, so Alina started looking abroad. She chose UK School of Floristry from Wilmslow to follow her dream to learn more about floristry. She also studied in Ian Lloyd’s class, who is in the top five florists in England, permanently invited as sworn in the most important competitions in the field. After several months of going to England, Alina graduated from the floral design school.

The two parts of a whole

Alina looks at her work in two parts. One is floral arrangements and the other is floral design courses. For Alina the year is divided in two: the season of weddings and events, which takes about six months, from May to November, and the season where only very few events are organized – for religious reasons and cold weather. Alina: “When it’s the season of events, the workshop „Flori cu Fitze” provides floral design services in premium locations with which we have a contract, such as „Palatul Stirbey”, or custom-made floral arrangements for luxury events.
We have provided floral services, among others, for an event of over 700 people in the locality Certeze, in Satu-Mare, to which we were only asked for white flowers and at a luxury event in the locality Bistrita, where I used pastel flowers. I assured the logistics with my team, but the flowers have arrived directly from the Netherlands in flower-filled trucks. The budget for such an event, with thousands of flowers, is several tens of thousands of euros. Obviously, we are also working with smaller budget events!”

Alina organized her first florist course in autumn 2015. “Five of the ten participants attending the course already knew me very well. At their weddings, I had the joy and the honor to make their floral arrangements. They also asked me and insisted on organizing floral courses because they wanted to learn as much about this superb job. Both they and others have told me that I send so many emotions when I talk about flowers, that I stir curiosity to anyone who has never had the slightest attraction to flowers. It is interesting to note that all five brides have their own flowers business now. Over the years, over 460 students have learned from me to love the flowers, to respect them, to care for them and to make them worthwhile – in the courses and training organized in Romania.”

Alina Neacsa:
“I am the author of several premieres for the Romanian market. I was the first to launch an intensive workshop for beginners and beyond, consisting of a two-day educational module that includes all the steps and techniques that a new florist needs, both technically and business. I launched the first Master Class course in Romania, a course in which the participants have the opportunity to work floral arrangements specific to large events, using impressive amounts of flowers. At the Master Class course in 2018, over 15,000 natural flowers of 30 varieties were used.”
Alina continues:
“In the summer of 2018, I organized the biggest floral event of the year in Romania, Royal Wedding Design. At the event, 15,000 natural flowers were exhibited in a weekend marathon at the Athénée Palace Hilton, after a unique Master Class course in Romania. The impact was of maximum intensity and the event enjoyed real success. During the event, which was widely covered in the central press in Romania, the natural-size replica of Meghan Markle’s bride bouquet, used for the royal wedding with Prince Harry, was exposed.
Together with a team of volunteers, we made arrangements from the flowers used in the course, which we then distributed on the occasion of the St. Mary’s celebration. We were gladly welcomed in all places where we offered arrangements from the 15,000 flowers. We felt the same joy giving the flowers. After the courses on Saturday and Sunday, we needed a day to make small floral arrangements from the multitude of flowers. Then we went to the Maternity Hospital in Bucharest, to the University Hospital, and the St. Nicholas Seniors Residential Center. In the floral arrangements given we have also used roses of the „Garden Roses” and „David Austin” varieties, recognized throughout the world for the spectacular and persistent smell.”

Through “Fitze Trip”, another component of Alina’s activity, she regularly organizes visits for Romanian florists to the most important locations of the world flower industry: at the Dutch Flower Market; Royal FloraHolland in Aalsmeer, at the world’s largest florist fairs, at large flower farms in various locations. Places in Fitze Trip are limited and are sold out very quickly. The video below highlights a ‘Fitze Trip’-event she organized in Holland for Romanian Florists.

A special trip she made was a trip to Tambuzi in Kenya,  where she attended and promoted a rose safari with Ercole Moroni, an event organized by Yes! Exclusive Weddings and Events. Together with her husband, Alina not only followed the Master Class there but also promoted the event in Images and video.

So we see in Alina the perfect ambassador for beautiful flowers. And we just know that once you’ve had the chance to meet this amazing woman, we know you’ll always be working with her. If it’s for promotional activities, for the love of flowers, for growers, or just for the art, …we love Alina’s work!